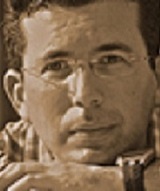 Albert was born in València, Spain, in 1963. He received the Licenciado en Física and M.Sc. and Ph.D. degrees in theoretical physics from the Universitat de València (UV), Burjassot, Spain, in 1985, 1986 and 1991, respectively. His professional affiliations have included UV, the Universidad Autónoma de Madrid (1990-1991), Spain, where he was an Assistant Professor, and the Universisty of Bern (1991-1993), Switzerland, where he was a Post-Doctoral Fellow. He was also a Visiting Scientist with the Niels Borh Institute (1988), Copenhagen, Denmark, and the Massachusetts Institute of Technology (1995, 1996, 1998, 1999, and 2001). In 1996, he joined the Departament d'Òptica, UV, as an Assistant Professor and became an Associate Professor in 2001.

He has developed his research in the areas of particle theoretical physics, theoretical condensed matter physics, optics and microwave theory. Former topics of research included nonperturbative quantum field theory and the vacuum structure and, in a minor scale, the theory of quantum antiferromagnets. His more recent research interests lie on electromagnetic propagation in optical waveguides and fiber devices, as well as in microwave waveguides and cavities.